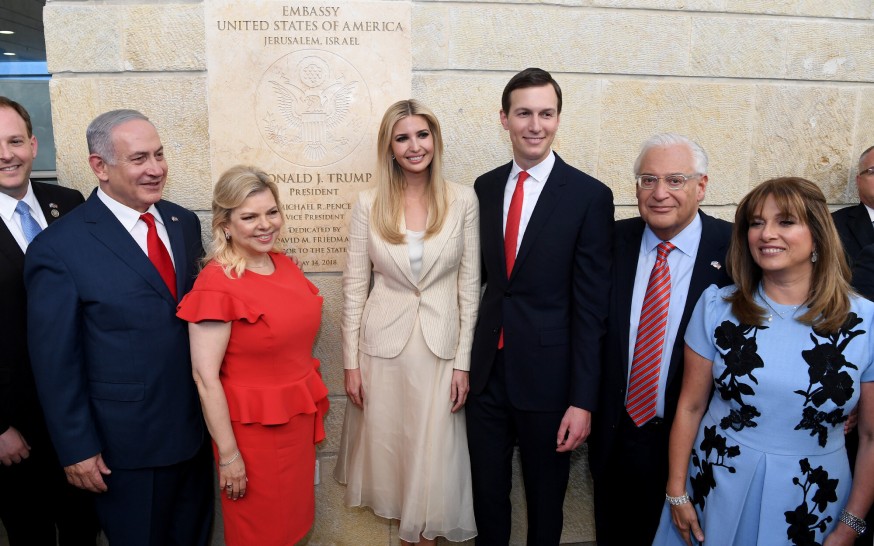 Israeli Prime Minister Benjamin Netanyahu and wife Sara, Ivanka Trump, Jared Kushner, US Ambassador to Israel David Friedman and wife Tammy Deborah Sand (left to right) at the opening of the US Embassy to Israel in Jerusalem, May 14, 2018. Photo credit: US Embassy Jerusalem/Flickr. Creative Commons License.

ISSUE: The United States is moving forward with plans to build a new embassy in Jerusalem on land which Israel stole from Palestinian refugees and internally displaced persons, including from Palestinian Americans.

➡️ Building an embassy in Jerusalem on land stolen by Israel from Palestinian refugees violates the private property rights of US citizens and other Palestinians. Palestinians have clear titles to this land, which was illegally expropriated by Israel.

➡️ This plan undermines the stated position of the US opposing Israel’s ongoing theft of Palestinian land for illegal colonization. The Biden administration cannot credibly oppose Israel’s expropriation of Palestinian land while doing the same thing to build a diplomatic compound in Jerusalem.

➡️ In addition, President Biden has still failed to make good on a campaign pledge to reopen the US Consulate in Jerusalem, which served as an important diplomatic link between the US and the Palestinian people for more than 150 years before the Trump administration shut it down.

(For more details, please see The Importance of Reopening the US Consulate in Jerusalem | IMEU Policy Analysis #1, November 14, 2021.)

➡️ Members of Congress should express opposition on social media to US plans to build an embassy in Jerusalem on stolen Palestinian land.

➡️ Members of Congress should write a letter to Secretary of State Antony Blinken and US Ambassador to Israel Tom Nides calling on them to cancel these plans immediately and to meet with US citizens whose property rights are being violated.

➡️ Members of Congress should consider legislation prohibiting funding for the US building diplomatic compounds on land which would violate the property rights of US citizens without their consent.

On November 7, the Jerusalem District Planning and Building Committee published a detailed plan, submitted by the US Embassy to Israel, for the building of a US diplomatic compound in Jerusalem on the site known as the Allenby Barracks. This site is located at the corner of Hebron Road and Daniel Yanovski Street slightly west of the 1949 Israeli-Jordanian armistice line in Jerusalem. 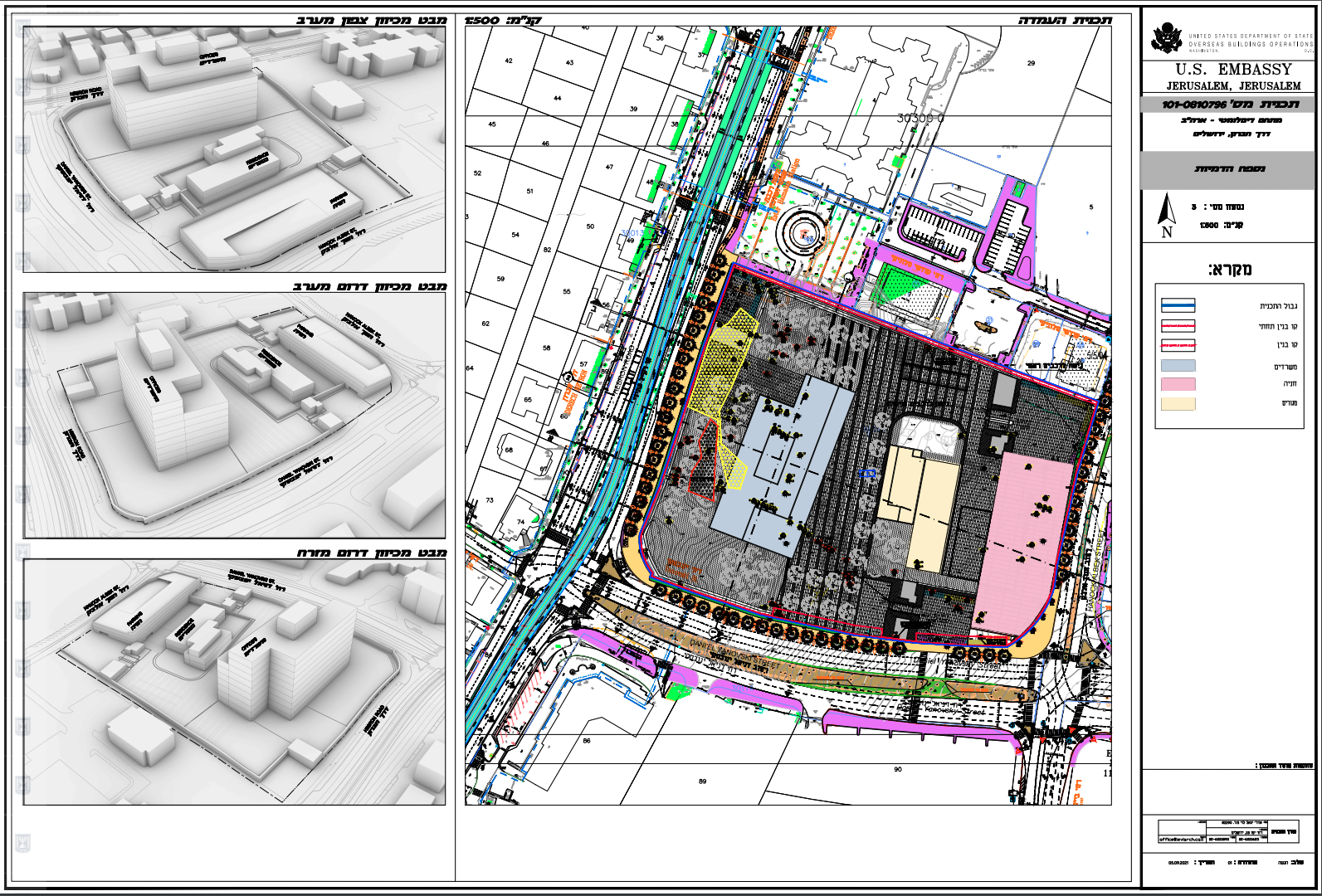 Figure 1. Schematics for the US Embassy to Israel submitted by the State Department to the Jerusalem District Planning and Building Committee. For a high-resolution version, please click here.

It is important to note that the United States has taken the initiative and is leading this process by designing and submitting the plans to build an embassy on this property despite detailed knowledge of the fact that almost all the property in question was stolen by Israel from Palestinian refugees and internally displaced persons, including from US citizens.

On November 10, Adalah–The Legal Center for Arab Minority Rights in Israel and the Center for Constitutional Rights sent a letter to Secretary of State Antony Blinken and US Ambassador to Israel Tom Nides calling on the US to cancel these plans and to meet with US citizens whose property rights are being violated. The letter includes archival documentation of the almost exclusive Palestinian ownership of this site, and of the fact that the British government was still paying rent to the rightful Palestinian owners of the property into the 1950s.

Israel illegally confiscated this property from Palestinians through its 1950 Absentees’ Property Law.

In 2018, the Trump administration recklessly moved the US Embassy to Israel from Tel Aviv to Jerusalem, upending 70 years of bipartisan US policy which had previously recognized Jerusalem as a corpus separatum, refused to recognize any state’s claim to sovereignty over the city, and refused to prejudge the city’s status prior to the conclusion of Israeli-Palestinian permanent status negotiations.

Since that time, the US has repurposed a former consular building on David Flusser Street, located in the former “no-man’s land” in Jerusalem between the Israeli and Jordanian armistice lines, as its embassy. However, this property is not large enough to accommodate the entire embassy staff, which is why the US is now proposing to build this new embassy compound.

The US has been leasing the site of the proposed new embassy building on the corner of Hebron Road and Daniel Yanovski Street for a symbolic $1 yearly rent under the terms of a January 1989 Land Lease and Purchase Agreement signed between the US and Israel.

(For details, please see Moving the US Embassy to Jerusalem: Historical, Legal and Policy Considerations, US Campaign for Palestinian Rights, p. 15.)

Recent archival documentation published by Adalah, referred to above, strengthens the previously known claim that most of this site is owned by Palestinian refugees. In 2000, Professor Walid Khalidi published his findings that at least 70 percent of the site is owned by Palestinian refugees, including approximately 90 US heirs. This information was submitted to the State Department by the American Committee for Jerusalem in 1999.

In other words, the State Department has had detailed information for more than two decades that the site in question largely is the property of Palestinian refugees, belying State Department claims that it conducts “thorough due diligence as part of our standard operating procure [sic] on all prospective sites for the U.S. facilities.”

In 1948, Israel expelled or forced to flee from their homes approximately 750,000 Palestinians (three-quarters of the indigenous population which had lived in areas of Palestine that came under Israeli control). These Palestinians became refugees and Israel refused to allow them to return home in violation of international law. Israel confiscated the movable and immovable property of Palestinian refugees and internally displaced Palestinians in an act of wide-scale dispossession.

(For details, please see The Nakba and Palestine Refugees | IMEU Policy Backgrounder, May 4, 2022.)

Building the US Embassy to Israel on stolen Palestinian refugee property would contradict previous US positions and pledges about Israel’s expropriation of Palestinian property. In December 1948, the US voted for UN General Assembly Resolution 194, which stated that “refugees wishing to return to their homes and live at peace with their neighbours should be permitted to do so at the earliest practicable date, and that compensation should be paid for the property of those choosing not to return and for loss of or damage to property which, under principles of international law or equity, should be made good by the Governments or authorities responsible.”

However, that same month, the US Consul General in Jerusalem expressed concerns that Israel’s newly-adopted Absentee Property Ordinance undermined this UN resolution. The ordinance would enable Israel to “sell vested property [and] provides [a] convenient means for [the] liquidation [of] Arab owned real property within Israel controlled areas. [The] Sale [of] Arab real property w[ou]ld eliminate homes to which refugees c[ou]ld return.” The consulate also expressed concern that this ordinance could negatively impact the property rights of US citizens.

And in April 1949, President Truman wrote to Jordanian King Abdullah that the US “has emphasized to the Israeli Gov[ernmen]t its hope that no action would be taken prior to the negotiations called for under the resolution [UN General Assembly Resolution 194] which would prejudice the…question of the return of refugees to their homes and the restoration of property to refugee owners.”

(Documents from the US National Archives, available upon request.)

Building a US embassy on stolen Palestinian refugee land would contradict previous US positions supporting Palestinians’ right of return, the restoration of their property, and would also violate the property rights of US citizens.