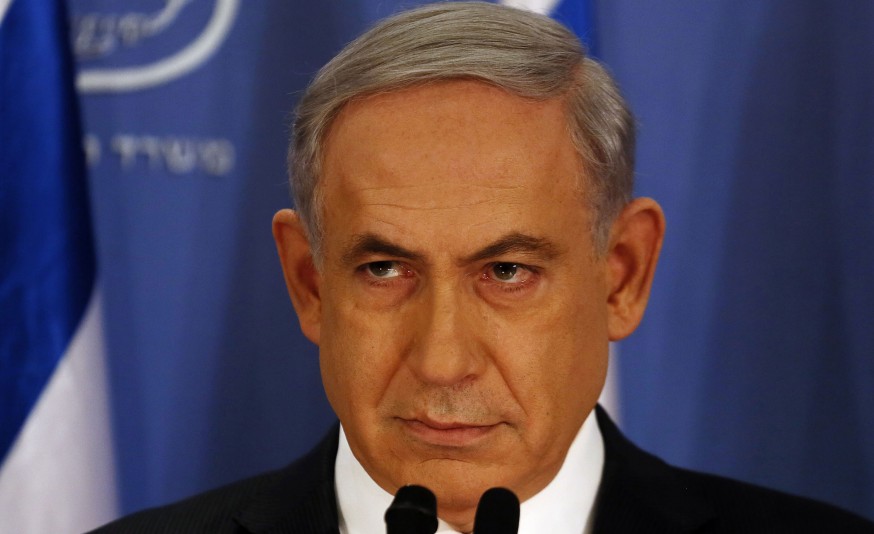 [Question: If you are reelected prime minister, there will be no Palestinian state?] “Indeed.” - March 2015

“[A]s long as Likud is in power, we won't divide Jerusalem, we won't make concessions, we won't withdraw from land." - March 2015

“I think the Israeli people understand now what I always say: that there cannot be a situation, under any agreement, in which we relinquish security control of the territory west of the River Jordan [the occupied West Bank].” - July 2014

"I will do everything in my power, forever, to fight against a Palestinian state being founded in the Land of Israel." - January 2013

"We are all against a Palestinian state, there is no question about it." - May 2012

“We oppose a Palestinian state completely... As our party advocates, we need to take full control of Area C [60% of the occupied West Bank] and impose Israeli law there.” - February 2013

“We will act to strengthen our hold on all parts of Eretz Israel, and will safeguard the settlement enterprise out of faith and the knowledge that exercising our rights to this land is our duty but also the best guarantee for Israel’s security.” - June 2013

“In this way, we will try, slowly but surely, to expand the circle of settlements, and to afterwards extend the roads that lead to them, and so forth. At the end of this process, the facts on the ground will be that whatever remains [of the occupied West Bank] will be merely marginal appendages… We fully agree and are completely united behind the prime minister’s position, which is to strengthen our foothold in the Land of Israel, to build in [occupied East] Jerusalem and Judea and Samaria [the occupied West Bank]." - January 2013

“Even when the prime minister [Netanyahu] spoke about the issue of two states, he didn’t speak about a [Palestinian] state in the full sense. He spoke about a long range of conditions that he himself says there is no chance that they will be fulfilled in the near future due to the actions of the other side." - January 2013

“We will try to apply sovereignty over the maximum [of the occupied West Bank] that we can at any given moment… It will take time to change people’s awareness but in the end this will penetrate. And then, what seems today like a fairy tale will eventually become political reality, and the reality on the ground.” - January 2013

“…not even one settlement in Judea and Samaria [the occupied West Bank] will be uprooted... Israeli citizens [settlers] will only be under full Israeli sovereignty. And west of the Jordan River there will only be one state and that is the state of Israel." - March 2014

“With God’s help we will continue building all the land of Israel and Jerusalem the capital… It must be made clear that this is only the beginning. This melody can’t be stopped… We can and will market thousands of [settlement] apartments in [occupied East] Jerusalem and there are more than 10,000 apartments ready for marketing in Judea and Samaria.” - August 2013

"I am opposed to a Palestinian state. It is unacceptable, mainly because of our rights to this land." - July 2013

“A deal giving up most of Judea and Samaria [the occupied West Bank] – the current Likud leadership will not accept that... We [who oppose such steps] are the majority in the party.” - September 2013

"The long-term vision is to apply Jewish sovereignty over the Jewish communities [settlements] of Judea and Samaria, and I am proud of it.” - November 2012