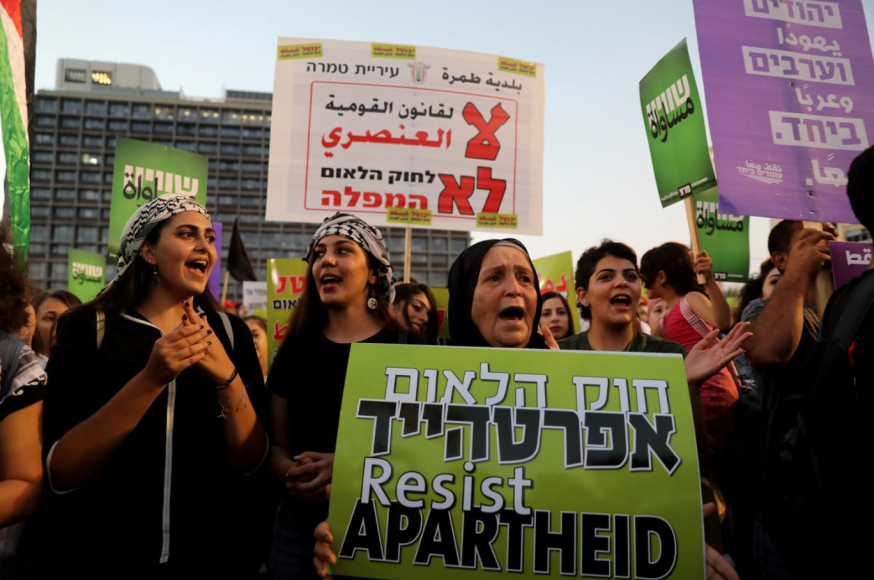 “Palestinians face systematic discrimination merely because of their race, ethnicity, and national origin, depriving them of electricity, water, schools, and access to roads, while nearby Jewish settlers enjoy all of these state-provided benefits… While Israeli settlements flourish, Palestinians under Israeli control live in a time warp - not just separate, not just unequal, but sometimes even pushed off their lands and out of their homes.”

“Israel has established and maintained an institutionalized regime of oppression and domination of the Palestinian population for the benefit of Jewish Israelis – a system of apartheid – wherever it has exercised control over Palestinians’ lives since 1948. Amnesty International concludes that the State of Israel considers and treats Palestinians as an inferior non-Jewish racial group. The segregation is conducted in a systematic and highly institutionalized manner through laws, policies and practices, all of which are intended to prevent Palestinians from claiming and enjoying equal rights to Jewish Israelis within the territory of Israel and within the OPT, and thus are intended to oppress and dominate the Palestinian people. This has been complemented by a legal regime that controls (by negating) the rights of Palestinian refugees residing outside Israel and the OPT to return to their homes.”

“The pursuit by Israeli authorities of the objective of maintaining Jewish Israeli control vis-a-vis Palestinians over demographics and land in Israel and the [Occupied Palestinian Territorires] amounts to a ‘purpose’ or purposes ‘of establishing and maintaining domination by one racial group of persons over any other racial group of persons,’ as set out in the Apartheid Convention. It also rises to an ‘intention’ or intentions ‘of maintaining that regime [or regimes of systematic oppression and domination],’ as set out in the Rome Statute definition of apartheid, and a discriminatory intent or intents, as part of the customary international law definition of persecution. These policies, practices, and statements collectively establish a discriminatory intent by Israeli authorities to maintain systematic domination by Jewish Israelis over Palestinians.”

“The Israeli regime, which controls all the territory between the Jordan River and the Mediterranean Sea, seeks to advance and cement Jewish supremacy throughout the entire area. To that end, it has divided the area into several units, each with a different set of rights for Palestinians – always inferior to the rights of Jews. As part of this policy, Palestinians are denied many rights, including the right to self-determination.”

“A regime that uses laws, practices and organized violence to cement the supremacy of one group over another is an apartheid regime... These accumulated measures, their pervasiveness in legislation and political practice, and the public and judicial support they receive – all form the basis for our conclusion that the bar for labeling the Israeli regime as apartheid has been met.”

“If I'm Jerusalem and I put 500 Jewish settlers out here to the east and there's 10,000 [Arab Palestinians] in here, if we draw the border to include them, either it ceases to be a Jewish state or you say the Arabs don't get to vote - apartheid. That didn't work too well the last time I saw that practiced in a country.”