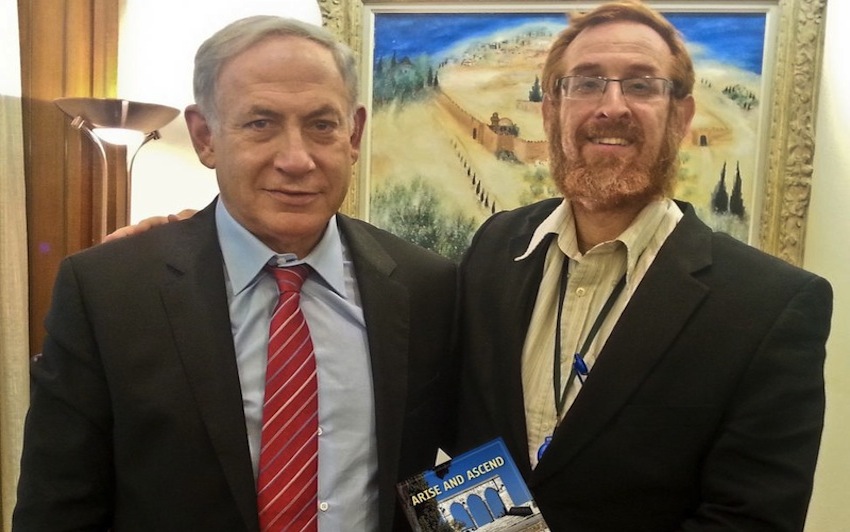 PHOTO: Israeli Prime Minister Benjamin Netanyahu meets with leading Temple Mount extremist Yehuda Glick, who presents him with a copy of his book, "Arise and Ascend: A Guide to the Temple Mount."

Over the past decade, the messianic Temple Mount movement has grown rapidly, gravitating from the margins of Israeli society to the mainstream. Often couching their agenda in terms of civil rights and religious freedom, these Jewish extremists have been pressuring the Israeli government to force open for Jewish worship the historic Noble Sanctuary mosque complex in occupied East Jerusalem (known as the Temple Mount to Jews), the third holiest site in Islam and one of the most sensitive religious sites in the world, with the ultimate objective of building a Jewish temple where two ancient temples once stood.

In recent weeks, their provocations have been a major factor behind protests in the occupied Palestinian territories, with many Palestinians fearing that Israel is planning to take over part or all of the Noble Sanctuary for Jewish use, as it did with the historic Ibrahimi mosque in Hebron following the massacre of 29 Palestinian worshippers by an Israeli-American settler in 1994.

While Prime Minister Benjamin Netanyahu claims he has no intention of changing the status quo in the Noble Sanctuary that has been in effect since Israel’s occupation of East Jerusalem began during the 1967 War, which allows non-Muslims to visit but not pray there, his cabinet and Likud party are filled with Temple Mount extremists, his government funds organizations whose openly declared goal is to build a Jewish temple in the Noble Sanctuary, and Israeli public schools teach Jewish children to yearn to do the same.

The current Israeli government includes a number of Temple Mount extremists in senior ministerial posts who have been agitating for the imposition of Jewish-Israeli sovereignty over the Noble Sanctuary and the construction of a Jewish temple there, including:

Israeli Government Support for the Temple Institute & Other Messianic Extremists

The Israeli government and municipalities like the city of Jerusalem directly fund groups such as the Temple Institute, which are actively working towards building a Jewish temple in the Noble Sanctuary, and sponsor their public events. The Temple Institute is also promoted on the municipality of Jerusalem’s website and on its official tourism site.

In addition to Israeli government funding for extremist Temple Mount groups and sponsorship of their events, public schools in Israel indoctrinate Jewish children into the Temple Mount movement and instill a desire to build a temple in the Noble Sanctuary.

For further reference, see our previously released fact sheet, Misperceptions Regarding Tensions Over the Noble Sanctuary.