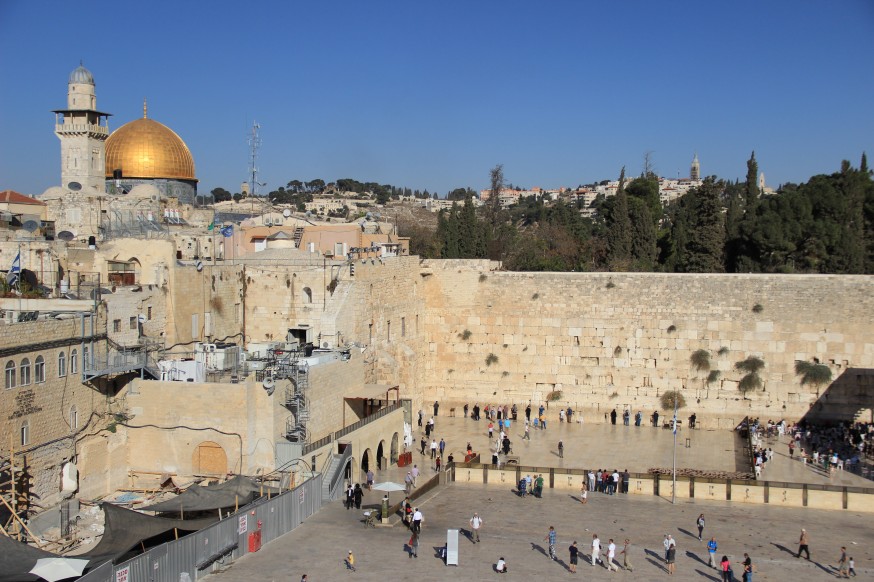 The Noble Sanctuary, including the iconic golden Dome of the Rock on the left, at top. The Wailing Wall, below right. (Photo credit: Christopher Hazou)

What is the Temple Mount movement?

​​Liberating the Temple Mount from Arab (Islamic) occupation… The Temple Mount can never be consecrated to the Name of G-d without removing these pagan shrines. It has been suggested that they be removed, transferred to, and rebuilt at Mecca.

Temple Mount extremism moving from the margins to the mainstream

​On December 30, 2010 a highly attended conference took place at Binyanei Ha’uma (The Jerusalem Conference Center). The event, promoted as ‘Every Jew Has a Part in the Sacred’ (the logo on the invitation proclaimed ‘Something good is happening in Jerusalem!’), drew thousands of attendees… The program included a discussion of ritual sacrifice and an exhibit presenting a model of the Temple. It also showcased a virtual presentation illustrating the construction of the Third Temple on the ruins of the Dome of the Rock. The conference was held under the auspices of the Jerusalem Municipality’s Department of Religious Culture.

The section dealing with ‘Love of the Land and the Temple’ is part of the social studies curriculum in state religious schools. Development of the curriculum began about seven years ago, an Education Ministry source said, and since then has undergone a number of adjustments. This year, the curriculum – which is geared for grades 1 through 6 – is mandatory as part of the students’ study of faith. There is no direct reference in the set of lessons or elsewhere in the section on ‘Love of the Land and the Temple’ to Al-Aqsa Mosque.

To convey a sense of the loss of the Temple, the workshop proposes that teachers explore the following: ‘A list of the most major threats, both spiritual and material, facing the Jewish people, and add all your personal difficulties and those of your students. And then think about how each item on the list would be different if we had the Temple right here, right now.’

The Temple Institute is dedicated to all aspects of the Divine commandment for Israel to build a house for G-d's presence, the Holy Temple, on Mount Moriah in Jerusalem. The range of the Institute's involvement with this concept includes education, research, activism, and actual preparation. Our goal is firstly, to restore Temple consciousness and reactivate these "forgotten" commandments. We hope that by doing our part, we can participate in the process that will lead to the Holy Temple becoming a reality once more…

The reality of the Jewish experience means that the Temple will be rebuilt. Many people who visit the Temple Institute are incredulous and cannot help but exclaim: "Do you really think that you will live to see the Holy Temple rebuilt?" The answer to that question is of little importance… Whether this transpires in our generation or not, we can still choose to be active participants, and not simply spectators, in G-d's bold plan for the Redemption of Israel and all humanity.

The Temple Mount and Land of Israel Faithful Movement

Return to the Mount