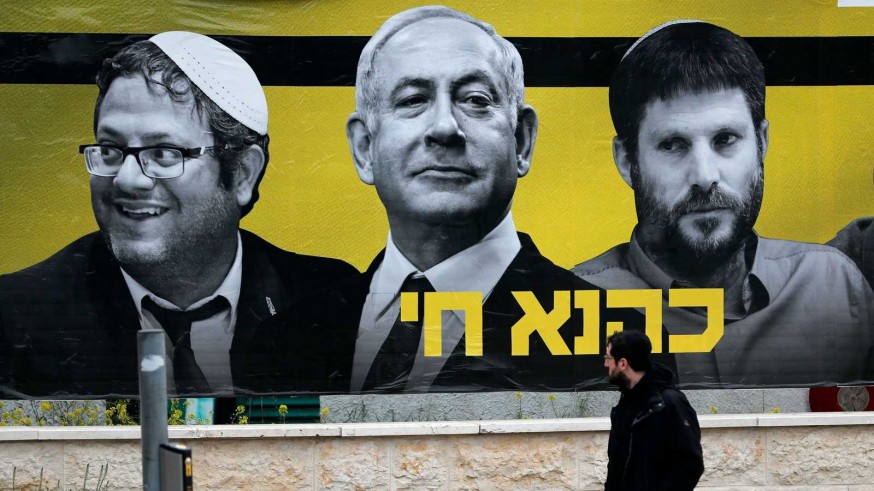 The following provides a brief description of the major parties, their policies towards the Palestinians, and notable candidates.
Broadly speaking, the parties and electoral lists can be divided into two categories: Zionist, which supports Israel’s system of Jewish privilege, and non-Zionist, which supports full equality for all citizens. The latter are comprised mainly of Palestinian citizens of Israel, about 1.9 million people, who make up about 21% of Israel’s population.

The number (1) to the left of the candidate names denotes their place on their party’s electoral list.

Likud has been the most powerful right-wing party in Israel since it was formed in the early 1970s and has governed continuously under Netanyahu since 2009.

Likud opposes the two-state solution and Palestinian statehood or self-determination in any part of Palestine/Israel. It strongly supports the construction of illegal Jewish settlements on occupied Palestinian land and formal annexation of the occupied Palestinian West Bank. During the 2019 and 2020 election campaigns, Netanyahu repeatedly threatened to annex large parts of the West Bank. Netanyahu declared he would temporarily “suspend” official annexation after Trump brokered a deal normalizing relations between Israel and the United Arab Emirates in August 2020 and in the face of massive international opposition.

(2) Yuli Edelstein, Minister of Health, Speaker of the Knesset

“Reform Jews in the United States are a dying world. Assimilation is taking place on a vast scale. They are not even tracking this properly in their communities. It is evidenced by the fact that a man who calls himself a Reform rabbi stands there with a priest and officiates at the wedding of the daughter of Hillary Clinton and no one condemns it, thereby legitimizing it.”

“In this way, we will try, slowly but surely, to expand the circle of settlements, and to afterwards extend the roads that lead to them, and so forth. At the end of this process, the facts on the ground will be that whatever remains [of occupied Palestinian land] will be merely marginal appendages… We fully agree and are completely united behind the prime minister’s position, which is to strengthen our foothold in the Land of Israel, to build in [occupied East] Jerusalem and Judea and Samaria [the West Bank].”

A former head of Israel’s internal secret police, the Shin Bet, Dichter introduced the original version of the “Jewish nation-state law” that was passed by Israel’s parliament in July 2018, formalizing in Israeli law the superior rights and privileges that Jewish Israelis enjoy over indigenous Palestinian and other non-Jewish Israeli citizens.

A new alliance of three extreme right parties (Jewish Power, National Union and Noam) that was brokered by Netanyahu who hopes that running together they will get enough votes to qualify for seats in the next Knesset and support him for prime minister.

Jewish Power (“Otzma Yehudit” in Hebrew) is an overtly racist, fascist party made up of followers of the late Meir Kahane, whose Kach party was banned from Israeli politics in 1988 due to its virulent racism and is considered a terrorist organization by the US. The party and its candidates advocate the ethnic cleansing of Palestinians from Israel and the occupied territories. Its platform (Hebrew) calls for establishing “a national authority for encouraging emigration” of Palestinians. During the 2019 and 2020 election campaigns, Jewish Power leaders Michael Ben-Ari (a former Knesset member for National Union), Baruch Marzel, and Bentzi Gopstein were banned by the Supreme Court from running because of their long history of extreme racism and inciting hatred and violence against Palestinians and left-wing Israelis. When Netanyahu made an electoral deal with Jewish Power during the 2019 election, it sparked outrage, even among many staunch supporters of Israel.

National Union also advocates the ethnic cleansing of Palestinians. In 2017, the party released a plan calling for official Israeli annexation of the Palestinian West Bank and stipulates any Palestinians living there must accept permanent subjugation, voluntarily leave, or be forced to leave or be killed by the Israeli military.

Formed in 2019, Noam is a small party composed of ultra-Orthodox Jews best known for being virulently homophobic. In 2019, it sparked controversy with a campaign ad comparing followers of Reform Judaism, left-wingers, and LGBTQ people to Nazis.

Israel Resilience (Blue and White)
Party leader: Benny Gantz
Number of Knesset seats won in 2020: 15 (as part of the Blue and White coalition)

Israel Resilience is a center-right party formed by retired general Benny Gantz in 2018. In early 2019, it joined forces on an electoral list (Blue and White) with the Yesh Atid and Telem parties to defeat Netanyahu. Following the close 2020 result, Gantz split the list (taking its name) by breaking his campaign promise and joining Netanyahu in a coalition government.

Gantz supports Israeli annexation of large parts of the occupied Palestinian West Bank, including the Jordan Valley, and embraced the plan for Palestine/Israel that Trump released in January 2020 that endorsed in advance Israeli annexation of much of the West Bank. He also believes Jerusalem, including the occupied Palestinian eastern section, should remain under Israeli control permanently and large so-called settlement “blocs” that divide Palestinian population centers into isolated cantons should stay in place. During the March 2020 campaign, in a move that was condemned as racist by Palestinian citizens of Israel, Gantz said he would not sit in a coalition government that included Arab parties, declaring he would only work with “anyone who is Jewish and Zionist.”

Yesh Atid
Party leader: Yair Lapid
Number of Knesset seats won in 2020: 13 (as part of the Blue and White coalition)

Yesh Atid ("There is a Future") is a center-right party that was a key part of Netanyahu’s coalition government from 2013-2014, when leader Lapid served as finance minister. After running with Israel Resilience and Telem as part of the Blue and White list during the 2019 and 2020 campaigns, it split from Gantz’s Israel Resilience after he agreed to join Netanyahu’s coalition, and went into opposition with Telem, which dropped out of the 2021 race.

Yesh Atid nominally supports a two-state solution with the Palestinians but wants to keep massive so-called settlement “blocs” on occupied Palestinian land in the West Bank that make the creation of contiguous Palestinian state impossible.

New Hope is a hardline right-wing party started by former senior Likud official and longtime Netanyahu rival Gideon Sa’ar in December 2020 with the goal of unseating his former boss. It opposes Palestinian statehood and rights in Palestine/Israel and supports Israel’s illegal settlement enterprise and annexation of occupied Palestinian land in the West Bank. It has attracted several defectors from Likud since its founding.

“We will try to apply sovereignty over the maximum [of the occupied West Bank] that we can at any given moment… It will take time to change people’s awareness but in the end this will penetrate. And then, what seems today like a fairy tale will eventually become political reality, and the reality on the ground.”

Yisrael Beiteinu (“Israel Our Home”) is a secular, far-right party founded in 1999 by Lieberman that represents mainly Russian immigrants.. It espouses hardline, racist policies towards Palestinian citizens of Israel. While in theory Yisrael Beiteinu supports a two-state solution with the Palestinians, as part of any such agreement the party advocates the “transfer” of Palestinian citizens of Israel to the Palestinian state, stripping them of their citizenship and the freedom of movement it allows within historic Palestine.

Yamina (“Rightward”) is a far-right electoral list formed in 2019 originally consisting of three parties, Jewish Home, National Union, and The New Right, but only the latter remains running under the name in 2021. The New Right strongly supports Israel’s illegal settlement enterprise and opposes Palestinian statehood or self-determination in any part of Palestine/Israel.

Shas is a right-wing ultra-orthodox religious party that has played a key role in past Netanyahu governments. Although its late spiritual leader Rabbi Ovadia Yosef was virulently racist against Palestinians and other non-Jews, at least in theory Shas is willing to accept the creation of a Palestinian state. Party leader Deri was born in Morocco and immigrated to Israel in 1968. In 2000, he was convicted of accepting bribes and spent nearly two years in prison.

United Torah Judaism is a coalition of two small parties representing ultra-Orthodox Jews of European origin, known as Haredim. Like Shas, which it is allied with, it was part of Netanyahu’s previous governments. Although historically it hasn’t had a clear position regarding the Palestinians, focusing mainly on domestic issues, in 2021 senior party officials said it opposes the creation of a Palestinian state in the occupied territories.

The Joint List is composed of three parties representing Palestinian and non-Zionist Jewish citizens of Israel: Hadash (5 Knesset seats), Ta’al (3 seats), and Balad (3 seats). All of them support full equality for all Israeli citizens, regardless of religion or race. After winning 15 seats in the March 2020 election with the United Arab List as part of the coalition, making them the third largest party in the Knesset, the UAL split off to run alone in 2021.

The United Arab List (also known by its Hebrew acronym, Ra’am) is a small Islamist party that ran as part of the Joint List in 2015 and 2020 but broke away to go it alone for the March 2021 vote. Leader Abbas, who is also a deputy speaker of the Knesset, has drawn criticism from other Palestinian citizens of Israel for cozying up to Netanyahu, who leads a racist far-right government and has been inciting hatred of Palestinians for decades, saying he would join him in a coalition government.

Center-left Labor and its precursor Mapai dominated Israeli politics for decades after the establishment of the state and initiated Israel’s illegal settlement enterprise in the occupied Palestinian territories but has been on the decline since the 1990s as Israeli society has moved rightward.

While Labor’s platform includes support for a demilitarized Palestinian “state” as part of a two-state solution, it also wants Israel to keep large so-called settlement “blocs” built illegally on occupied Palestinian land as part of any peace agreement, meaning the Palestinian “state” would be divided into several non-contiguous parts, surrounded by Israeli settlements and walls. In 2020, under former leader Amir Peretz, Labor joined Netanyahu’s coalition government, despite having pledged not to do so during the campaign, causing a rift in the party.

Meretz is a small left-wing party that supports a two-state solution with the creation of a Palestinian state in the occupied territories and freezing construction of Israeli settlements. In 2020, Meretz won three seats running on a list with the Labor and Gesher parties. For 2021, Meretz and Labor decided to run separately and Gesher not at all, with one early poll showing Meretz at risk of failing to meet the threshold required to win seats in the next Knesset.