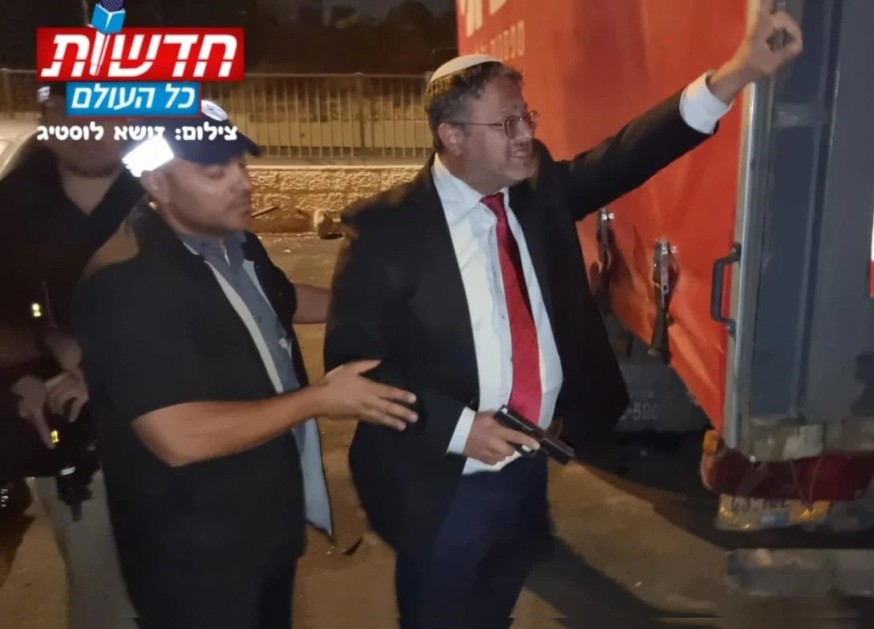 Itamar Ben-Gvir, leader of the extremist Jewish Power party, threatens Palestinians with a gun in the flashpoint neighborhood of Sheikh Jarrah in occupied East Jerusalem, October 13, 2022. If Netanyahu forms the next government, Ben-Gvir will likely become a cabinet minister. (Photo: Twitter)

The following provides a brief description of the major parties, their policies towards the Palestinians, and notable candidates.

Broadly speaking, the parties and electoral lists can be divided into two categories: Zionist, which support Israel’s system Jewish privilege and apartheid, and non-Zionist, which supports full equality for all citizens. The latter are comprised mainly of Palestinian citizens of Israel, who make up more than 21% of Israel’s population.

The number (1) to the left of candidate names indicates their place on their party’s electoral list.

Yesh Atid is a center-right Zionist party that was a key part of Benjamin Netanyahu’s coalition government from 2013-2014, when founder and leader Lapid served as finance minister. In June 2021, Yesh Atid joined with the hard right Yamina party to lead a coalition to oust Netanyahu after more than a decade in power. In July 2022, their government collapsed, triggering the November 2022 vote.

New Hope staunchly opposes Palestinian statehood or self-determination of any kind in Palestine/Israel and supports Israel’s illegal settlement enterprise and annexation of occupied Palestinian land in the West Bank, including the Jordan Valley.

At times, Blue and White’s Gantz has voiced support for negotiations with the Palestinians but he and his party also support Israel annexing large swaths of the occupied West Bank and retaining control of occupied Palestinian East Jerusalem, rendering any Palestinian state that might be established devoid of any geographic contiguity or sovereignty.

‘We will wield disproportionate power against every village from which shots are fired on Israel, and cause immense damage and destruction. From our perspective, [Lebanese cities and towns] are military bases… This isn't a suggestion. This is a plan that has already been authorized.’ He added: “Harming the population is the only means of restraining [Hezbollah]."

Likud has dominated right-wing politics in Israel since it was formed in the early 1970s, governing continuously under Netanyahu from 2009 to 2021. Likud opposes the two-state solution and Palestinian statehood or self-determination in any part of Palestine/Israel. It strongly supports the construction of illegal Jewish settlements on occupied Palestinian land and formal annexation of the occupied Palestinian West Bank. During the 2022 campaign, Netanyahu signed a pledge along with his far-right allies to engage in “massive construction” in West Bank settlements if they form the next government.

Religious Zionism is a coalition made up of three extreme right-wing, overtly racist, homophobic parties: the Religious Zionism party, the Jewish Power party, and the Noam party. They united for the campaign in deals brokered by former Prime Minister Netanyahu. As with Netanyahu’s establishment Likud, the parties in Religious Zionism strongly support Israel’s illegal settlement enterprise and oppose Palestinian statehood or self-determination in any part of Palestine/Israel. Polls show Religious Zionism winning as many as 14 seats, which would make it the third largest faction in the Knesset.

The Jewish Power party is composed of followers of the notorious American-born Rabbi Meir Kahane, whose Kach party was banned from Israeli politics in the 1980s because of its extreme racism and policies, including calling for the enslavement and ethnic cleansing of Palestinians. Kach and other groups founded or inspired by Kahane were labeled terrorist organizations by the US government in the 1990s after numerous deadly attacks by their members in the US and Palestine/Israel, including the massacre of 29 Palestinian worshippers in the historic Ibrahimi mosque in Hebron in the occupied West Bank in 1994. Jewish Power leader Itamar Ben-Gvir wants to establish a “migration ministry” to expel indigenous Palestinian citizens of Israel who he deems “disloyal.”

During the campaign, one of Jewish Power’s candidates was caught on hidden camera admitting that some minor superficial efforts the party has made to appear less extreme were just a “trick” to avoid being disqualified from running for the Knesset for overtly promoting racism and violence.

Much of Jewish Power’s growing support comes from young Israelis, including in traditionally more liberal, secular areas. During the campaign, leader Ben-Gvir visited Blich high school in the Tel Aviv district, where he was warmly welcomed by students chanting “Your village should burn,” echoing an anti-Arab chant popular with the Israeli far-right.

In September 2022, on the eve of the Jewish holiday of Rosh Hashanah, Jewish Power paid for a billboard over a highway in the city of Ramat Gan featuring photos of two prominent Palestinian members of Israel’s Knesset, Hadash party leader Ayman Odeh and Ta’al party leader Ahmad Tibi, and Ofer Cassif, a Jewish member of Hadash, with the words “May our enemies be banished” underneath, a reference to a traditional Rosh Hashana prayer.

Yisrael Beiteinu is a secular, far-right party founded in 1999 by Lieberman that represents mainly Russian immigrants. It supports hardline, racist policies toward Palestinian citizens of Israel. While in theory Yisrael Beiteinu supports a two-state solution with the Palestinians, as part of any peace agreement the party advocates the “transfer” of Palestinian citizens of Israel to the Palestinian state, stripping them of their citizenship and the rights and freedom of movement it allows within historic Palestine.

Although Shas' influential, longtime spiritual leader Rabbi Ovadia Yosef was virulently racist against Palestinians and other non-Jews, in the past Shas was open to the establishment of a Palestinian state in the occupied territories as part of a peace agreement. However, in recent decades the party has moved further to the right along with Israeli society as a whole and now strongly supports Israel’s settlement enterprise.

Shas played a key role in past Netanyahu coalition governments and is running as an ally of Netanyahu’s Likud party again in 2022. During the 2022 campaign, Shas joined Netanyahu in signing a statement declaring it will support “massive construction” in West Bank settlements if the party is part of the next government.

Party leader Deri, who has held numerous cabinet positions since the late 1980s, was born in Morocco and immigrated to Israel in 1968. In 2000, as interior minister, he was convicted of accepting bribes and spent nearly two years in prison.

United Torah Judaism is a coalition of two small parties representing ultra-Orthodox Jews of European origin, known as Haredim. Like Shas, which it is allied with, it was part of previous coalition governments led by Netanyahu and continues to be allied with his Likud party.

Although historically it hasn’t had a clear position regarding the Palestinians, focusing mainly on religious and domestic issues, in 2021 a senior party official said it opposes the creation of a Palestinian state, declaring it’s “something which we cannot agree to in any fashion, since the Land of Israel was given to the People of Israel.”

Jewish Home is a far-right religious nationalist party that strongly supports Israel’s illegal settlement enterprise and is categorically opposed to Palestinian statehood or self-determination of any kind.

In 2014, during Israel’s deadly assault on Gaza, which killed more than 2,100 Palestinians, Shaked posted an article on her Facebook page written by a former Netanyahu speechwriter calling Palestinian children “snakes,” declaring that all Palestinians are “the enemy,” and calling for the killing of Palestinian civilians. It read in part:

Behind every terrorist stand dozens of men and women, without whom he could not engage in terrorism… They are all enemy combatants, and their blood shall be on all their heads. Now this also includes the mothers of the martyrs, who send them to hell with flowers and kisses. They should follow their sons, nothing would be more just. They should go, as should the physical homes in which they raised the snakes. Otherwise, more little snakes will be raised there.”

Hadash (the Democratic Front for Peace and Equality) is a coalition of left-wing groups. Ta’al (the Arab Movement for Renewal) is also a secular left-wing party. Both represent Palestinian and non-Zionist Jewish citizens of Israel, support the dismantling of Israeli settlements, the establishment of an independent Palestinian state in the occupied territories, and full equality for Palestinian citizens of Israel. Hadash and Ta’al were part of the Joint List that included the United Arab List and Balad during previous elections, which was the third largest faction in the Knesset following the March 2020 election.

In September 2022, on the eve of the Jewish holiday of Rosh Hashanah, the extremist Jewish Power party paid for a billboard over a highway in the city of Ramat Gan featuring photos of Hadash leader Ayman Odeh, Ta’al leader Ahmad Tibi, and Ofer Cassif, a Jewish member of Hadash. Underneath their photos was quote from a traditional Rosh Hashana prayer reading: “May our enemies be banished.”

Balad is a secular left-wing party that represents Palestinian citizens of Israel. It supports making Israel a state with full equality for all of its citizens, the creation of a Palestinian state in the occupied territories (West Bank, East Jerusalem, Gaza), and the return of Palestinian refugees who were expelled from their homes during and after Israel’s establishment.

During the 2015 and the September 2019 to 2021 campaigns, Balad was part of the Joint List with the Hadash and Ta’al parties but left to run alone in the 2022 campaign. In September 2022, Balad was disqualified from running by the Central Elections Committee for allegedly negating the existence of the state of Israel, however the decision was overturned by Israel’s Supreme Court. The party and several of its candidates were similarly disqualified by the elections committee in past elections with the decision eventually being overturned by the court.

Center-left Labor and its precursor Mapai dominated Israeli politics for decades after the establishment of the state and initiated Israel’s illegal settlement enterprise in the occupied Palestinian territories in the 1970s but has been on the decline since the 1990s as Israel has moved further and further to the right.

Meretz is a small left-wing party that supports a two-state solution with the creation of a Palestinian state in the occupied territories and freezing construction of Israeli settlements.